If you had asked me about anything related to spirituality more than 5 years ago, I wouldn't have had any opinion to share. I have never considered myself a religious person (was never baptized or a church attender) and I knew nothing of those beliefs and practices. I had experiences that caused me to grow up believing in psychic abilities, ghosts, and aliens.. but those dots didn't connect for me until 2016. In fact, I will share that I never thought I could become the person that I am today. Despite secretly having that sense about myself, I never thought I would see the day where I'd be recognized by other psychics & healers and be given opportunities to develop these gifts.
It's literally as if a door opens and there's no turning back. Not to make it sound scary, but it is life-changing to walk this path. A lot of the stories I now have to share would make me sound crazy... but only to those that don't believe it's possible. When I started to "come out" about it, people turned their nose up at how I was able to completely change my life - specifically all the friends I had that were still suffering from their trauma and stuck in their addictions. I don't judge them for feeling as they do because I've been there too, but one of the messages I feel I need to share is that you can change how you feel and react to everything through spiritual healing... and it doesn't have to be anything more than that.
I used to be constantly triggered by my surroundings - be it home, work or other/public scenarios. As this was happening, my mental struggles manifested as physical symptoms (body aches & pain that covered the bases for Fibromyalgia; Irritable Bowel Syndrome; I was prone to pulling muscles and pinching my sciatic nerve). I would shut down - and hole myself up at home.. often needing to quit my job when I hit this point. Despite also being medicated for depression & anxiety and attending therapy, I couldn't find anything that helped me. This changed the first time I sought spiritual healing; it quickly became the only way I could face my issues and move on, and transform my beliefs by instilling more positive energy & beliefs to override them.
It all sounded bizarre and far-fetched to me before. But much like seeing is believing, my first spiritual experience was all I needed to be pushed off the seat of 'skepticism'.

As I came to terms with my past and began healing the parts of the body that were affected, I felt my anxiety slowly slip away. I began to empower myself through spiritual healing and eventually, had enough confidence to face most of my triggers without a knee-jerk reaction. It's all a complete day-and-night change that makes it hard for me to properly reflect in some ways - I can recognize who I used to be, but I can no longer relate. Somehow, someway, that person is that far behind me now...
I respect those that seek nothing more than clarity, guidance and/or healing through spiritual means - this is perfectly okay in my books because as long as you're accepting of it, you're looking in the right place for proper insight! Having said that, I still respect those that don't accept it but I also tend to put up a form of wall (like an observational filter) with them. This isn't intentional and usually goes up when I have some form of intuitive warning sign, but I can't deny that it always happens to those that aren't obviously conscious or "light" in energy. Having pursued this path of healing, it's become more obvious and more often that I'm receiving intuitive messages.
This is the power of pursuing a path of ascension through the means of becoming an Intuitive Healer.

But this is not to say that the path of healing is the only way to experience spiritual ascension. Even as I became a Reiki Practitioner (at level I) and noticed more unlock for me, I didn't even know so much more was possible. It was a process in itself in my opinion, and I didn't truly feel it was "complete" until I finally gained confidence through serving others. That all began with my Goddess practices; in time, my daily practices proved that I'm always working with them and in that resonance. Following that, I spent months developing and practicing as a Priestess - and despite the shifts and healing I experienced, I didn't feel ready to accept my new title until I received my Master's blessing and certification.

All things that I never imagined I would do...
(I just have to share that fact!)


And this leads me to my next fork in the road... Just as I was here - at a fork - about a year ago, and a year before that... wondering what's next for me. The spiritual journey is never-ending! There's ALWAYS new things I learn from working with my clients, new methods I discover when I "weave" a custom healing session together, and new courses my past Teachers now offer that spark a new interest for me. I share this now because among us, we're seeing more people awakening and unlocking their gifts faster - because the veil has finally lifted! If you feel the "call", know that it's confirmation of your truths coming to light.. and now it's up to you to take the next step.

Awaken
Align
Ascend
💜
Are you just getting started on your path?
Book a free online consultation call with me to find out what I can offer you! 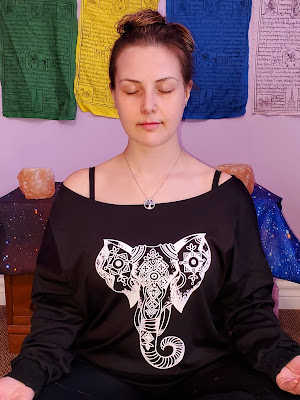