How Reiki Progresses You 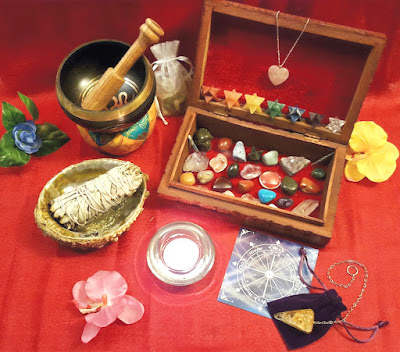 There are many reasons people should receive Reiki, but tending to emotional/mental needs is just one primary reason that people turn to it in the beginning. I personally came into Reiki after one of my past teachers mentioned I should learn it (after reading me as an Empath & natural healer; like many out there), and I found it greatly aided the other therapy I had just started to address past trauma. There's some truth that Empaths can feel the effects of Reiki more so than others, but even those that have no interest or investment in spiritual matters notice how light and calm it makes them feel. It's always questionable when you know nothing of it because there's nothing to see - we don't even have to touch the other person in order to provide it to them (which is how experienced Healers can do it online), but as I like to say: "You can't understand it until you try it"!

I admit I didn't feel a whole lot during my first session - which is normal for many people - but there was one instance that freaked me out and caused me to begin believing. The Healer used her hands directly on my feet, pushing them down with some pressure (to ground me). I stayed calm and with my eyes closed throughout the session, waiting to notice anything as it happened, but I ended up taking a peek when it felt like she was working on my head again - while I was still feeling her hands on my feet! To my shock, no one was near my feet... but it wasn't until we wrapped up the session and talked about it that she confirmed that an Archangel was present and assisted with my session.

As if that experience wasn't undeniable enough, I also went to another Healer for one session just to see how different it might be. At the time, I had an ovarian cyst that had been there for a couple of months, and it was growing. I never mentioned it to her, assuming there was nothing she could do about it anyway. But sure enough, I felt her working around my body and stopping when her hands were overtop of the cyst. She stayed there for a few minutes working on it, and the physical sensations became extremely painful! It felt like she was sucking it out with a vacuum, which ended when it felt like it exploded (as someone that had ovarian cysts before, I do know how it feels when it explodes; it's a paralyzing kind of pain). Still, I took this with a grain of salt... thinking she maybe stunted the growth or shrank it at best, but not even a week later - when I had a follow-up ultrasound done and got the results - I was told the cyst was gone.

I resumed my sessions with the first Healer (whom became my first teacher) as I went through my personal healing journey to recover from my past trauma, but as I was beginning to fully feel and understand Reiki, my teacher pushed me to begin training. I didn't feel confident or capable at all, but as the timing of the training lined up with when my dog, Teddy, began to get extremely ill, I threw myself into it. The only thing that Reiki training doesn't explicitly tell you is the fact that practice = success. I know people that gave up completely and called it "bull" because they couldn't feel it right away, and I've mentored students that immediately get frustrated and disconnect because they aren't seeing or feeling anything... But here's the thing: I had to do a bunch of practice on myself and others before the pieces started falling into place! Like channeling (and other practices), you get better at it the more you practice, and yes, more gifts open up in time and as you get stronger.

Aside from the healing aspect of Reiki, I slowly began to notice how it helps to "uplevel" you on your spiritual journey. Many people work with spirit guides on their own, but your first attunement to Reiki sets you up with 2 spirit guides that assist you in healing. They're some of many that you add to your spiritual team; for example: I now call upon a team that has more than 30 people in it. As you build these relationships by practicing, you gain more confidence and clarity because messages will start to come from wherever and whomever can pass them onto you. Channeling & Healing are two-way streets - spirits need a receptive, approachable channel (person) to work with, which is just one reason why rituals & practices to give appreciation are so important, and [in the cases where this is lacking] can explain why some capable people don't feel or see what they need to.

With every level/training you achieve, the channels widen. It wasn't until I was attuned to level II that I began to feel confident in the fact that I could safely & accurately channel messages from spirits. The more I practiced, the more I began to feel the effects of Reiki, including seeing myself work on my clients' ethereal body. With more practice, I was also able to start seeing past injuries and illnesses as they grabbed for my attention. An example was a recent in-person client I had who appeared to me as if his right arm had been broken from his shoulder to his elbow - low and behold, I told him about this afterwards and watched his eyes widen as he told me he broke that arm as a baby. Another example is that after being attuned to Master level, I started channeling past lives messages & needed healing. Everything comes in moderation, which is why it can be discouraging when students completely give up under the assumption they're no good at it.

It wasn't until I received my Master/Teacher attunement that my spirit guides finally introduced themselves to me. I had always known they were there, assisting me and giving me messages, but until this point they just appeared to me as bodies of energy. That night, hours after my attunement, as I laid in bed getting ready to sleep... they stepped out in front of me - clear as day, in full detail down to the colours & textures of their clothing & faces - and shook my hand while introducing themselves by name. It was completely unexpected, but also revelatory at the same time. THIS was when I began to realize the power of how Reiki develops one on their spiritual path. And while it's true that this occurrence isn't guaranteed with the Master level (it's possible it can happen earlier, or not until later), I found it noteworthy. I was overjoyed to finally begin spending time with my spirit guides "in the flesh".

So in retrospect (or if you choose to skip down here for a TL;DR!), here's a checklist I recommend to those that wish to become capable in the way that I am. Nowadays, I mentor students who declare that they cannot compare to me in any way, but I quickly tell them that I used to be completely intimidated and feel completely lacking in my abilities at the beginning too! It takes training and practice, and this list can help set you up for success:

If you're interested in receiving or doing any training with me - check out my website!
I offer programs as well as healing packages, which can all be done online.
#reiki #energyhealing #spiritualpath #ascension #intuitivehealer #spiritualtraining
Labels: Addiction Childhood Trauma Empath Confessions Handling Dark Thoughts Lightworker Reiki
Location: Ontario, Canada