A Nod to the Childless Adults

There's nothing more off-putting then conversing with other adults who look down on you because you've decided not to have children. I've received different degrees of this throughout the years myself... In my early twenties, I was being questioned on my [lack of] plans to "settle down". As I got into my mid-to-late twenties, I was told I didn't "have a life" and that I was "missing out" because I didn't have plans to have children. Then as I got into my thirties and I watched my friends have kids, I was slowly removed from their circle because I didn't "join the party". There are MANY reasons someone would decide not to have kids, and I hope you can either gain an understanding or find solace here...
Only because I have a bit of a baby-face, I nowadays find people assume I'm too young to have children. But they'll immediately ask about it when they find out my age; to which I say maybe I look younger because I've never been pregnant. It's a theory at best, but having recently talked to someone who was so hung up on my young appearance that she wouldn't take me seriously, I couldn't help but think this post is overdue. Having a child is a HUGE responsibility that one should feel ready for.. which is exactly why - back in my twenties - my answer was always "I just want to live my life freely and have fun before I even think about that". Having grown up in a dysfunctional household, I had a long list of things I both needed and wanted to do before I could even consider such a decision. 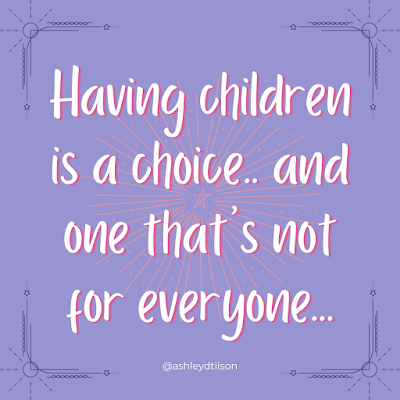 As a young adult, I was adamant that I wouldn't have children because I couldn't see myself ready & willing to do it. I think this is a perfectly normal response, especially nowadays where it takes people so long to establish their careers, afford a home, etc. I always believed that someone should be settled into their career, own a home, and have all the bases covered before welcoming a child - and over the years, I still can't see any other ideal situation. I know there are parents that welcomed a child into the world with less than favourable circumstances and made it work (likely working harder because they had a child) and kudos to those people! But for people like myself, who see too much negative to roll those dice, it feels better this way.
There's also a bigger point here that I want to get to that has everything to do with those that grew up in dysfunctional / abusive / traumatic environments. Having this history made it much easier for me to not want children - because as a young adult, I was still trying to make up for that. I was trying to survive as someone that was figuring themselves out while enjoying independence for the first time. In a nutshell: I was too damaged to see myself as a parent. I also realized that I shouldn't because I foresaw the potential for me to fly off the handle one day and possibly take it out on my kid. THIS IS A RED FLAG that made me decide I couldn't even allow that possibility. In fact, as I began my healing journey and met others from the same circumstances, their thoughts on this were the exact same as mine... which was my first bit of solace. 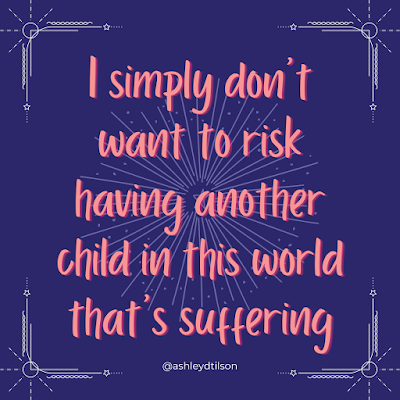 And I'm not going to lie - as a female, it was a very trying time to be around my friends as they were pregnant and becoming mothers. Between the hormones and the questions, not to mention how the timing aligned with my healing, I saw myself thinking about it. This was a rather low-point early on in my spiritual journey because naturally [as my counsellor advised me to do], I started talking to people about it. There is no better way to try and make any big decision than to talk to others about it... Unfortunately, some people jumped to conclusions about myself and my marriage, which in turn, brought me into any even bigger realization about myself. Since I was both persuaded and vulnerable (due to healing), I was considering it as a means to fill the void - and wondered if having a child was the only way to give myself purpose.
The longer I looked at it that way, the more I realized how wrong my thinking was. No child's arrival should be determined by another's need; especially when the person thinks it may somehow be the answer to their problems. I saw this was wrong for so many reasons, and most definitely not the mindset one should have about parenthood. I'd rather nip the future mental issues in the butt now by avoiding it altogether - to which I wholeheartedly agreed (once again) that I don't want a child. I love connecting with children and spending time with them... but that's enough for me. Many people use this "test experience" to decide... meanwhile, they sometimes fail to realize one point in having a relationship with someone else's child - which is that you didn't have to change their diapers, listen to them cry all day/night on bad days, and spend a lot less hours sleeping because of them. 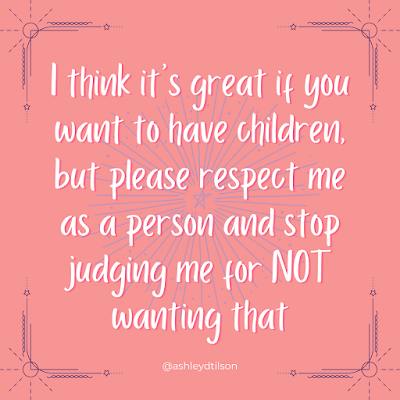 I'm sure there's people that hear this opinion and think some highly unwarranted and negative thoughts, but it's all my truth and I know others share it too. I KNOW I get grumpy when I don't get enough sleep, or don't have enough time to pursue my own goals (in my case: my business). And that's without having any dependents (aside from my dog)! Everyone has their own way of living that works best for them, and they know they won't operate the same if something significant like having a child is added to that equation. Why can't everyone else just respect that? I don't know... but I certainly won't "fall in line" just because society tells me it's the "right" thing to do. (Queue more thoughts about how societal expectations lead people's lives, and it can be irritating)
Wherever you land on this issue, know that it's got nothing to do with one's intelligence, maturity level, or their values if they decide having children is not for them. In fact, it's been enlightening to meet couples older than myself who decided to never have children... and they lead great lives complete with adventurous activities & trips, and a solid professional career. I really do see it as a preference, especially when someone has a traumatic past that would potentially effect how they parent. Just because I decided not to have children doesn't mean I'm a lesser person -- I still own a home, have a dog (whom I consider my fur-child), run a business, and do all the responsibilities that come with all of that... and I just wish people that thought otherwise would come around to understanding. And if you're in the same boat as me, rest assured that it's okay and you don't have to make this decision if you truly don't want to!
#childfree #lifewithoutchildren #childhoodtrauma #empathconfessions
Labels: Childhood Trauma Empath Confessions Life Lessons
Location: Ontario, Canada