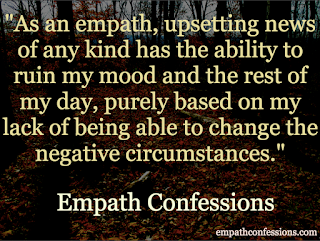 Having done a lot of research to support my own discovery, I was saddened I couldn’t find a complete resource online. What I only found through reading one-off articles and blog posts was what it’s really like to be an empath – this is the comforting reassurance you’re not alone, and the key identifier.
If you’re using this to identify yourself, note that I am both clairsentient/empath and claircognizant. I do feel that I know what is attributed to each, but admit there are times when those lines are blurred for me. For a while I thought they were one and the same, but research and reflection has shown me my “double whammy” (as I jokingly call it, because it allows me to feel, know and predict what’s happening).
Firstly, know that it’s something that’s always been a part of you. Some people take a long time to learn about it, and I believe there are a lot more people out there that just simply don’t realize it (or maybe don’t want to). Secondly, it’s not just about having empathy. While by definition it can sound the same, it is by far a more in-depth experience. Many people have empathy, and we adore those that do, but that does not automatically mean they are an empath. 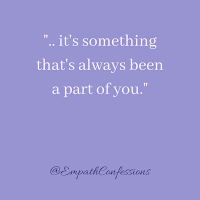 I’m going to be forward with the rough stuff. Because let’s be honest: if you’re an empath, you know you’ve had your days where you’ve called this a curse. The effects are harder when you’re unaware of it, but it’s easy to see what was wrong when you do come to understand it. It may not be true for all, but as some of us tend to be old souls, we sometimes find we get the tougher end of the stick in life (arguably for the sake of learning experience).
The rough stuff has to do with what you endure as an empath. Before discovering who I was, this resulted in me dealing with a lot of health issues. Relatable or not, the indicator is always in what you experience when you’re around people. For example, my stomach would turn and cramp with pain when I was in a stress-filled environment or conversation. Personal conversations always resulted in me becoming a shoulder to cry on, but left me feeling drained, heavy, and responsible for helping that person. Uneasy conversations are equally emotional too – leaving you feeling physically uncertain, enraged, cheated, and sometimes, knowing when something or someone is not right. The easiest for me to see and experience is being near someone that’s upset or angry – for me those are more like feeling a dark (sometimes leeching) cloud or a ticking time bomb in the room.
Those are just a few brief ways to describe how it feels, but essentially you know you’re an empath when you know this: you can feel (and I mean really feel) other’s emotions. If you’ve ever noticed your mood tends to change with your surroundings, and you know you’re not always “100% you”, then you know why that is. You may have had emotional explosions you can’t explain (you may find you have stressed over issues that aren’t your own; but ultimately involved you), and find you tend to be the “go-to” for people. 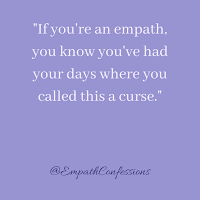 Another commonality I realized through conversing with other empaths is that we have a low tolerance for media. Some people (myself included) love movies and TV shows, but have drawn a line. For example: News, in any format, is off limits in my home as I find it stressful to deal with. We can take in news and certain subjects, but know what causes an emotional and mental stir in us. For me, the local evening news just upsets & enrages me, but also makes me want to run out and fix everything that’s wrong.
As an empath, upsetting news of any kind has the ability to ruin my mood and the rest of my day, purely based on my inability to change the negative circumstances.
I could probably go on with many more examples and explanations, but this should be enough to identify with. If you can relate to the experiences above, then you may very well be (or know that you already are) an empath. If I had to give it a nutshell explanation, it would be this: the ability to feel the emotions of others nearby, with the ability to experience other persons’ perspectives when you do converse. Naturally, we’re also good counsellors because the above point allows us to know what to say and how to comfort people. 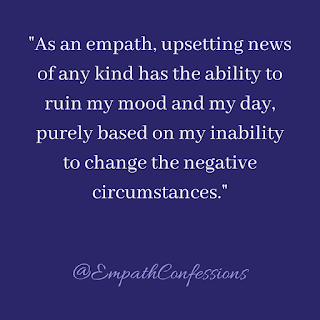 Despite the unease in what we endure, there are some magical moments throughout. There is nothing that feels greater than to be in the presence of someone like-minded, or to spend time with someone that feels trustworthy. And once you understand it, it becomes easier to interpret your experiences, which should help alleviate the physical effects.
I plan to publish more “how to” articles for empaths, but I encourage you to do your own research if you’re looking for identification. With luck, it won’t take you long to get the affirmation you need. I would also recommend meeting someone alike if you can, as this was what gave me answers initially. Just know that as long as you keep an open mind, and pay attention to the signs, you’ll be on the right path.