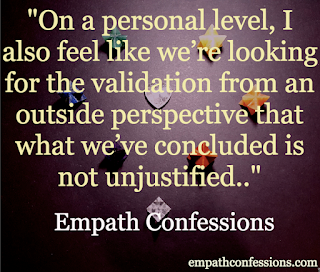 As a HSP (highly sensitive person), I haven't always been the most stable person to live with - emotionally speaking. Despite knowing that this quality is one that my husband adores about me, I have also seen first-hand how challenging it can be to deal with. Whether it’s my occasional explosion when I become overwhelmed/stressed, or simply my inability to let certain things go (I never forget anything of significance!), it’s a quirk that comes with my personality.
It wasn’t until I discovered what I am that I was able to get this under control. The responsibility of control ultimately has to be put on the empath themselves – discovering if this is who you are, recognizing its effects, and learning how to control & deal with it. With that being said though, it’s never going to be “scotch-free”... because as an empath, we are conduits for (other people’s) energy (emotions)!
I wanted to write this series of articles as my own awakening in my abilities sparked a lot of conversations with my husband. As someone that went through her discovery alone, I wanted to share my thoughts and experiences in the hope that it would bring comfort, understanding, or even help, to anyone that ends up reading. Some topics were in order, with one of the most important being on the subject of “comfort”.
Even controlled, an empath will occasionally need to verbally vent to release the pent-up emotions they’ve experienced. Hopefully, every empath will at one point have someone understanding that they can occasionally confide in – which helps to serve this purpose. But there are some days that we just only see fit to release it in the comfort of our own home; and more than likely, simply will just only be comfortable to do in the presence of our significant other.
If you are the significant other, know this: If we’re doing this in your company, THIS IS A GOOD THING! If we come home to you but start to unravel and have a need to vent about every negative thought/person/experience from the day/week, just know that we’re able to do so because we trust you with every fibre of our being. This is also not a task that is easily done, so know that it’s literally just something we need to do from time to time to feel better. On a personal level, I also feel like we’re looking for the validation from an outside perspective that what we’ve concluded is not unjustified; hence, we also trust your judgment.
When I had this conversation with my husband, admittedly it became more of a “what am I supposed to do?” on his part. I was surprised to hear that he felt useless being the listener during these rants – he expressed sincere regret in his inability to be of any help for what troubled me. This saddened me and made me make a statement that brings me to the ultimate point here: “I don’t need you to have the answers or advice, I just want you to listen”. I just want someone that I trust to listen to what I’m feeling and why, and just tell me if I’m ever out of line. After all, I'm just trying to purge the thoughts and emotions that I've picked up on that I can't speak on or do anything about.
Ultimately, that is the message I have to pass along to significant others: we don’t need you to have the right advice to our situations, we just appreciate you being there and listening! As long as you care enough to do that, that is enough. And please, for your own sake, don’t take on any of our struggle either – it’s hard enough for us to deal with as it is; and we definitely don’t wish it to be brought upon you.
For those that find that this isn’t the case, give yourself a pat on the back! It’s hard not to resort to this activity at certain times in life. Perhaps you have already found a more effective outlet, which is fantastic. Just remember that sometimes it is okay to verbalize buried emotions! We are still human after all, and we know that it feels better to say what we really want to.
As an empath, the best way to avoid getting to this boiling point is being able to remove yourself from these burdens altogether. I plan to write an article on this, but will say that there are many ways to do so including being honest and forward in your decisions & interactions, letting go of situations that are not your responsibility, etheric cord cleansing, and carrying crystals. If you’re new to some of this, don’t be intimidated, as it will just become a part of your everyday once you start adopting it.
One last piece of advice I gave for situations where I am truly upset and there is nothing anyone can say or do about it: just give me a hug! For empaths, a hug is the most comforting gesture anyone can offer... and I'd be surprised to meet someone who would argue with this much!


While this article talks about needing to verbally vent, I am NOT suggesting that this be a (regular) practice. Wherein a relationship where it's mutually agreed and understood that it's a conversation with the intention to "sound off", then it can be helpful and sometimes productive - personally, this helped me to process a lot of things during my own awakening, however I no longer do this.