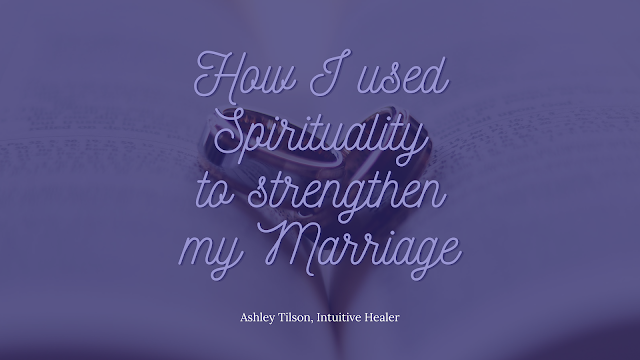 Although a teensy bit late for the Valentine's season, I've been asked to share my thoughts & experiences with spirituality and marriage - namely, how my journey has actually helped me to both further appreciate and strengthen my marriage. It was something that caught me by surprise.. and as my husband and I ended up watching our friend's marriages fall apart while we had nothing to disagree with or fight over, it dawned on us that we're in a better position than we thought we were.

It's true the marriages take work... because after spending so many years together, you need to find ways to spice it up by throwing in new experiences and opportunities for renewed connection & excitement. And it's also true that spiritual awakenings cause many people to question if they're with the right person; leading one to consider this while those they train beside start finding divorce lawyers. So to know that I found myself dealing with both of those situations, albeit at different times, I came into a whole new journey with my marriage that I will gladly share a bit of here..

On October 23, 2021, my husband and I celebrated a milestone anniversary. That date marked 10 years since we got married, and 17 years since our first date. If nothing else made us feel old, the realization of those stats alone did! We met in college, starting out as good friends who both just got out of serious relationships that broke our hearts.. so when we both realized we were quickly becoming inseparable, we embarked on the idea of our first date. Despite being the "typical" testosterone fuelled young man that he was, he was a complete gentleman that waited until the last minute of the date to ask if he could kiss me and if I wanted to begin officially dating him.

In retrospect, our foundation was solidified by being best friends before even talking about taking it further. This is something that - in my later years - I remind myself of because no matter what we go through together, we've always worked as a team to solve our issues. Beyond everything else that I'm about to share, I find this foundation to be of the utmost consideration in any relationship... because if you can't stand being in the same room as someone, wanting to tackle all challenges with them, and be able to freely speak your mind and trust them.. I believe there's honestly nothing you can do to strengthen the relationship.

As I learned through all my other relationships; trust is something that's earned, not assumed or given. So when my instincts had me going haywire because I was dealing with the unhealthy relationships I had with my family, trust became something that took longer than usual to build. But as my parents went out of their way searching for reasons to not like him, and they created lies that tried to manipulate me into leaving him, I ended up seeing the contrast that I failed to see up until that point.

While I was busy accusing him of things he didn't do, being borderline abusive myself because my parents wanted me to believe that he was the abusive one -- all to find that he would take every piece of shit I threw at him and be nothing but hurt and perplexed by it all -- I quickly fell apart, realizing I had a complete gem of a partner right in front of me. My first piece of advice is to not let outsiders dictate what you should do in your closest relationship(s).. because only YOU know how they treat you and truly make you feel by being the one you spend the most amount of time with.

Everything went as smoothly as it could considering that I spent the first several years of our relationship holding back. I was still damaged and controlled by my past abuse, which frankly left me mentally unavailable and inattentive in ways that I should've been. My sexual abuse caused me to have zero interest in maintaining intimacy, my depression & anxiety caused me to create problems that weren't there, and my inability to have received proper healing meant that I wasn't my authentic self. Yet he stuck around and loved me anyway because he could see the light that was hidden in my darkness.

So when I did seek out the solutions that I desperately needed for healing, it caused me to change into a different person.. and I was almost certain this meant we'd split during the course of getting to know each other all over again. Low and behold, the fact that I wasn't "okay" (mentally speaking) and holding back on being truthful meant that he learned to hold back too.. so being forgiving of this, on both our accounts, was the key to working through this challenge and being open to the possibilities that lay ahead. We welcomed it as a chance to completely start over, as opposed to seeing it as a trial that would determine if we would stay together. Longer story short: I'm glad we did!

Every year got better as we took steps to improve all aspects of the relationship.. but the real trial came when I started getting serious about my spiritual work and launched my business. There was a longing for having a partner that was not only open-minded to it, but whom would share and take part in some of these practices with me. He never shot it down, never spoke ill of it, and even volunteered for my case studies.. even though he wasn't a full believer or someone that wanted to pursue such practices for himself.

I never pushed, I gave him space & time, and only offered advice when the door was open for it - so that instead of pushing him away, I ever so slowly opened him up to it. It may have taken 3 years for him to experience the scope of Reiki, Inner Child work, and Ego Alchemy, but he did when he needed it most.. and by experiencing the results for himself, he not only noticed the power of the work but developed a deep appreciation for what I do (and thus, a deeper appreciation for me). My worry about him not being right for me, because he didn't consider himself spiritual, ended up melting away as I realized I'm meant to ease him into this process!

I share this all as a retelling to give you hope, because what came later shocked me even though I knew the information was buried deep within him. He had always been a supportive partner by being there, even just in silence and comfort when that's all I wanted, although he admitted he couldn't fully understand all that I've been through. To say he's been a rock is just a fact, so when he finally felt ready to reveal his past physical abuse (at the hands of his mother), I melted in a million different ways.

On the one hand, he felt these beatings were insignificant compared to what I had been through, and on the other hand, he didn't feel safe to share that information any sooner because he thought it would just add to the pile of trauma that I had struggled to deal with. Now that I was healed, and now that I could handle this bit of information with ease, understanding, and with positive & inspiring responses to it, it was something that proved to be a "now's the time to reveal it" situation. And since this was something he had never told anyone, had never spoken up about before... it strengthened our bond knowing that we had reached a new height of having zero secrets between each other.

The long story made short is that I needed to not only be the best friend that I was to him, but the supportive & patient life partner who equally met his efforts to improve our relationship, as well as the coach and example to him that I am to my clients.

By watching me transform, grow, and work on others, he found the inspiration needed to better his life, our relationship, and reach for the possibilities that he didn't know he had.

There is hope, and it's true that only time will tell how everything will develop - but such is life, right? So my bottom line advice to anyone that only sees cause to wonder is this: Be patient, don't jump to conclusions unless you have a solid reason to, and be nothing but the example you're striving to be through your spiritual work. I know for a fact that if I had sat back and waited, not putting in the same amount of effort that he was giving to me, then he would've eventually decided to leave me... but then I would've messed up the best relationship I've ever had and lost the soulmate that I now know he is.