When the Motherhood Ship has Sailed... 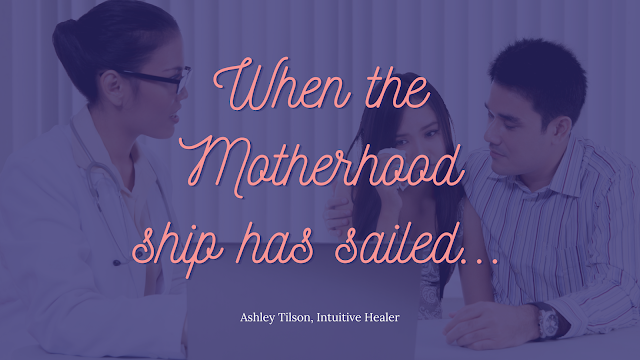 Those of you that know me well or have at least kept up to date with this blog know that it's been a personal choice for me to not have children of my own. Or rather.. that my childhood trauma became a huge deterrent for me even being able to see myself as a mother. Often, people that have experienced childhood abuse enter their 30s saying that they can't see themselves becoming a parent. I'm of that opinion, and friends of mine that have a similar history haven't been able to entertain the idea either.
But here's where I'm going to reveal a personal truth that I've been keeping secret -- there's another factor which helped make that "child-free" decision for me...
Through a flurry of medical experiences that left me with more questions then answers, I found out that I was born with a double vagina - which means that I have two vaginal canals, each of which leads to it's own cervix (2 cervixes total), and a "double uterus" (one uterus that's more or less split down the middle by a septum). This "set-up" equals a significantly higher miscarriage rate and the reality that it would be a great challenge to carry a baby. I finally want to share my surprise in finding out that it's something else to have this decision made for you...

Between the lines of truth I shared here - about how my husband and I started dating and carried an understanding that we don't want kids, and how my decision was only temporarily stirred when I watched some of my friends have babies - lies the unspoken fact that it's a far-fetched idea for me to have one. Finding this out gave more weight to the reasons why we're a childless couple, and the reality is that it's just easier to say that "we don't want them" then explain how I have a rare medical anomaly who's case is now being used in teaching gynaecology.
It's all thanks to a deformity that came to be while I was still in the womb, and while it's not completely unheard of for someone like me to get pregnant.. it's also a long road in which I'd have to expect recurring miscarriages and the need to have a C-section if a pregnancy were to succeed.. because it's a scenario that could equal more complications for the baby. And for my specific "set-up": there's not enough space on either side, nor a sufficient blood source to connect to, for a fetus to grow. How it took so many damn years to be discovered was maddening, but finding this information out turned out to be a sentencing of its own.

I found this out in one of the hardest ways imaginable... I had an IUD inserted years prior, which wasn't at all easy to do and required extra measures (that doctor should be getting in trouble for forcing it without investigating!), and I ended up requiring surgery to have that IUD removed. It turns out that it went up one cervix and was planted in the "half-uterus" on the opposite side. Through having that surgery, I got the full picture of my anatomy down there, and was scheduled for another surgery to remove the wall that separates my vagina into two - something that apparently should happen during teenage years - knowing that is the full scope of surefire correction available for this situation.
It sounds funky but it's really not.. I found out it's been the cause of years of pain & discomfort and absolutely horrible [menstruation] periods. I've always had super heavy & crampy periods, have had ovarian cysts (first one at age 12), and have never been able to use a tampon; yet despite initially complaining about these things to my doctor, it wasn't investigated and I was instead put on birth control when I was only 13 years old. So here I was, in my 30s, and finding out that those complaints should've been indicators of this deformity... because the reality is that I have two pathways in which I bleed through every month. YIKES!

And along with that news: the other reality is that between my age and the challenge this situation presents, the likelihood of having a successful pregnancy is low. So I quickly realized how so many other women must feel; when they're ready and willing to have a child, but find out that it's can't be that simple for them. There is something about that decision being made for you that causes a mental pain that only adds more questions than it answers.
I've kept this to myself for a long time because as mentioned, it's painstaking to even explain it to others. The truth is that people don't have the right to know this kind of personal information, and all too often, those that are oblivious to the facts want to jump to offering their opinion either way. I decided, upon discovering my anatomy wasn't normal, that it was a done deal. I knew that even if I changed my mind and wanted a child, I wouldn't be willing to go through those setbacks & complications.
It's been hard enough being a child-free couple in public and having to hear assumptions from those speculating why we don't have kids, so why would I open the door to more heart-wrenching questions & opinions by revealing that it's not that simple for me? It's a subject that no one should be questioned about and if anything, I want to share how sorry I feel for others that find themselves in these shoes. If I ever wanted to flip off a person, it would be over a conversation of this topic.. because nothing that anyone can say will change the facts.
I will admit that I still wasn't even sure if I ever wanted a child (back when I received the news), but upon being told my new reality.. it hit me hard. Just the realization that if I ever changed my mind, I may not be able to.. that's information that takes a bit of time to truly settle in. In my 1st post-op briefing, I was told that I should've had a 2nd IUD inserted in the other/empty side of the uterus.. but seeing as I went years without and didn't get pregnant just speaks to how unlikely it is to happen.
Where I've landed has been similar to my opinion as it has developed over the years -- wherein I pour my focus, energy, and love into our non-human dependents and ourselves. And at the end of the day, as long as I'm happy and my needs are met, and I'm able to continue giving back to others through my business, then I'm checking off all the moral boxes [in my life] that are most important to me; which has always helped to override the momentary hormonal, motherly impulses that have popped up in my life.