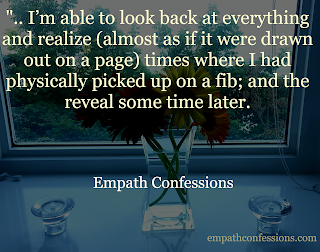 Hopefully if you’re an intuitive and/or empath and you’re in a relationship, your significant other at least understands enough to at least respect it. A brief conversation my husband and I had was along the lines of him being a skeptic – he didn’t know what to believe, and he didn’t want to be pushed into it. While curious about some of the readings he see's, my new practices are not imposed on him and take place in their own private space. For me, there isn’t a problem as long as I’m not criticized or treated differently for it.
Surely this conversation will come at some point, even if it’s not intended. If all is well, it will be as understanding as possible. As people that had no religious ties throughout our lives, neither of us had any confidence in the initial explanation; except for the fact that I could now finally explain myself, and that the explanation felt right. For my spouse, he simply accepted that’s what it is and respects my new lifestyle, but does not want to be forcibly involved. Although it would probably be interesting to have a spouse (or friend) with the same hobbies, I don’t think there is a better outcome than to accept & respect it.
One important aspect that we ended up discussing was on the topic of honesty. At this point in time, I’m able to look back at everything and realize (almost as if it were drawn out on a page) times where I had physically picked up on a fib; and the reveal some time later. Because I was unaware of my abilities, I suffered physical ailments as a result of not “seeing” what I was actually interpreting. Now that I know what it is, I had to ask if he was okay to agree to not hide anything from me going forward (alternatively, I would end up pointing it out). Maybe it sounds like a tall order, but as a happily married couple: we decided it wasn't an issue.
I only mention that point because I’m sure a lot of others have had to bring this up. Everyone has their own background, relationships, and boundaries, but we come to a point where we realize we do more harm to ourselves by remaining idle with certain situations and people. My husband and I used this chance to better our relationship; it seemed to be no better time to do this than when you start this new chapter of your own life.
To the significant others out there: I hope you do feel you can accept the new lifestyle as it plays out. Be honest if you can’t, as we can understand why. Having the chance to explain it to him, and how it affects me, seemed to be helpful in his understanding – especially as he noticed how it explains some of my behaviour and past (health) issues. Both sides should realize how this affects the empath – physically, emotionally, and mentally – and recognize how this affects our life. Believe me when I say though: you are in for a magical treat if you’re open to sticking around!
The acceptance conversation can possibly go another way – which I would hope is not the case for anyone, but is a possibility. For myself, I already decided that I wouldn’t be able to deal with relationships where it wasn’t accepted. I deemed that necessary as I intended to put my happiness & wellbeing in the front seat for once. I’m not trying to persuade anyone on how you decide it should go, but you’ll want to consider what you think is best for you. Everyone has the right to decide where they stand, and want to decide/learn, and be completely honest about it all. Yes, it will take time, and patience, with (hopefully) understanding. Keeping an open and curious mind is what allowed me to open this door, after all!
To the newly awakened: you will need some patience and understanding when presenting this information, and be prepared for whatever reaction you may expect to get. Blunt, but true. If the conversation goes well by you, just allow everything to transpire over time. Whatever position you look at it from, a period of adjustment will be almost imminent (skepticism, acceptance, development; whatever the case may be for it.). Even if you’re not in a position to have this conversation, at least consider where you stand and what you would need for your future.
This may not even seem like an important conversation, but I can’t tell you one other person I’ve met like me that hasn’t ended up losing a relationship or two as a result of their reveal. And whether it’s simply removing yourself from toxic relationships, or worse yet – family & friends that laugh at you, there tends to be a divide surrounding your own discovery. As scary as this time may sound, it is also a necessary string of events that will leave you at peace with yourself; as you later realize how happy you are without that negativity in your life.
No matter which direction these conversations go, or even who you have it with, I hope you have the chance to do right by yourself by being as honest as you can be. In the end, we realize we’re all too good at picking up others' moods and emotions – we might as well utilize this information for our own personal good, if nothing else.