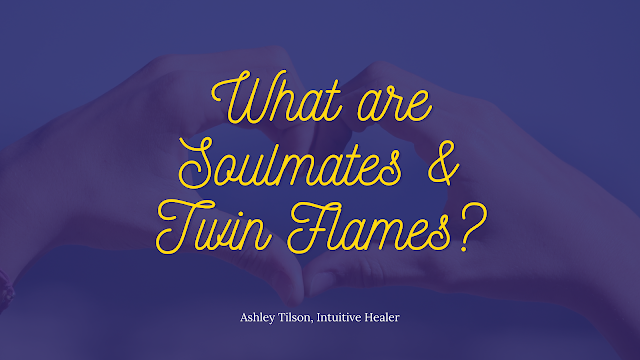 It's that time of year... with Valentine's Day behind us and the exciting vibes of Spring on the horizon, the topic of LOVE is fresh on everyone's minds. Whether you have a loved one or not, there's no doubt that this timing causes one to consider where "the one" is, and I'm hoping this will give you some hope and clarification. While working one-on-one with clients that are interested in spiritual understandings/teachings, I find this question comes up often; they want to know more about soulmates and twin flames... so here is my take on it!

I wouldn't be covering my usual disclaimers without pointing out that opinions may differ, but that tends to come from personal experiences and what is a just simply a different perspective. It's no secret that some people are just downright wrong for each other, but that doesn't guarantee that they don't become romantically involved. Certain people come into our lives to teach us a lesson or two (or more), and sometimes we need to be face-to-face with our polar opposite in order to see a certain truth about ourselves.

Just like how we can feel better around certain people, we can feel worse around others.. and that kind of thing takes experience to clearly see through. And if you can feel energy (empath; clairsentient), then you can not only notice how you can tap in to understand another person, but can sometimes mirror them and take their emotions upon yourself. This is why we often find ourselves bending over backwards for people that we later regret spending time with. And this leads people to ask the ultimate question about their spouse following their spiritual awakening, but it's something that takes some time and soul searching to find the answer..

The truth is that we all have a group of soulmates on this planet with us. I couldn't even guess a number.. but let's put it this way: there's enough that no matter where in the world you are, you'll be able to find one if you're open for it. There isn't enough that you'll find one around every corner, but it's all about being in the right place at the right time. That's why it often requires devoting yourself to your passions & hobbies, because it's through those efforts (and when you least expect it) that you'll meet.

But even if you've got a gold star of a spouse that you don't believe to be a soulmate, don't fear - there are others among us that are just good for us because they love us, inspire us, and carry their weight without a complaint, and that is enough if you are perfectly happy with them. Where this tends to cause an emptiness and yearning is if you're leading a spiritual life and/or feel there's something missing from the relationship that you know, deep down, you can't get from the person you're with. This is why many people go out in search of one of their soulmates, and it's also why people try to find their twin flame.

The thing about soulmates is that they may not be 100% of the same mind-frame and opinions, but it's still a close enough match that it doesn't matter. It's because of the synchronicity between two soulmates that allows them to have non-heated, constructive conversations about the things they don't see eye-to-eye on, to laugh about their differences, and blow over issues so quick that it doesn't even warrant a second thought.

I like to refer to soulmate couples by referencing the Yin & Yang symbol -- where each are visibly different, but they completely complement each other. Everyone has flaws, but your soulmate is the one that can compensate by being able to support you through yours, while you do the same for them and their flaws. Some end up staying good friends for life because they meet when both are happily married to other people.. and the synchronicity is there regardless of if they're romantically involved or not. The same situation also applies to twin flames, which leads me into that..

At this point in my journey, I'll admit that I have heard varying pieces of information which lead me to be uncertain about one specific answer: how many twin flames may be present. I have a theory that the answer is more than one, but it's definitely less than the number of soulmates available. Regardless of what the answer is, this is where a soulmate is more than a soulmate - it's another version of ourselves that seems almost too good to be true. Words are hardly needed when around them because you think the same, act pretty damn similarly, and your energies skyrocket when in each others presences.

Some people are fortunate enough to find their twin flame and marry them, and some keep them close as best friends; because again, it can happen that you meet when neither of you is looking for love (already happily married), and sometimes, they may be of the same sex and that might not be a romantic pursuit of interest. I'm all for love no matter who it is, but the reality is that meeting a twin flame might not be enough to make one willing to change their sexual orientation... and that's okay. The important part is that they found each other and have some form of relationship!

No matter what your opinion is or what is it you're seeking right now, there's one objective that's clear for everyone: it's that we ALL want to spend the rest of our lives with someone that completes us. There's nothing that hurts more than being with someone who leaves you feeling a lack of appreciation, support, and love, and it hurts even more when we're on the journey to finding someone and can't help but feel discouraged.

As true with many other spiritual truths, we need to let go and stop the search to find what we want.

When we least expect it - and more importantly, when we're not going out of way and trying too hard to find it - it will end up in front of us. Sometimes it's flawless because we're busy focusing on our passions (which in turn elevates our energy & vibration), then BOOM, there they are. It's a reality that's akin to stating that when someone is actively searching [for anything], they often look so hard that they end up missing/overlooking what they actually need or want... which is why it's better to take a step back, stay focused on yourself, and let the magic of the universe work it out for you!