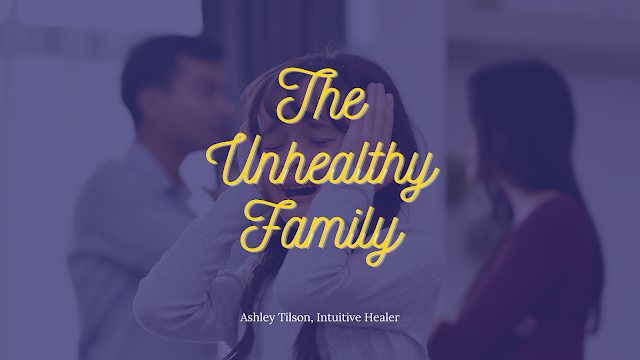 I had some questions come my way as a result of my last article on dealing with the holiday season, so I thought "What the hell.. I might as well get raw and real about it!". In this time of further awakening, a lot of people are being triggered by others but have a hard time determining the reason, and with the timing of holidays, I thought I would share the few incidents & indicators that made me realize how unhealthy my [birth] family is. The truth with childhood trauma - of any kind - is that you're TAUGHT that it's completely normal and that everyone else is the problem... but once you're mature and out in the world, you slowly begin to notice the opposite. That was just one way I started waking up to my truths; upon the shuffle of gathering with my (then) boyfriend's family and mine, I saw a huge difference that left me feeling alienated and out of place. I thought I'd share some of this here for those that need confirmation or education on what's healthy and what's not.

The family I came from can easily argue that they did everything they could... and I'm sure they did, but the truth is that's not the detail that matters in the end. Growing up, I was used to waking up early on Christmas morning along with my sibling.. sneaking out to the living room to see what Santa brought for us and seeing if it was late enough to wake our parents and start opening gifts. It was always a joyous morning, but in retrospect, it seemed like the illusion over the pain in the family/home. We very rarely had aunts, uncles, cousins, etc. involved; save for the grandparents that lived in the same apartment building as us (which had always been the case). So to say that I never experienced the big, extended family holiday is actually quite accurate.. but of course, it wasn't until just a few years ago (as I healed from my past trauma) that I began to have reasons to speculate as to why that was. But that's besides the point... it was knowing what I knew vs what others did that made the cog wheel start turning in my 20s...

My husband and I met & started dating when we were in college, and since we started out as friends (who spent 6+ hours a day chatting on MSN Messenger), our relationship blossomed pretty fast. So it wasn't long before I found myself sitting down to dinner with his family.. and when I did, it felt as if I was watching a movie. They're not a "picture perfect" family either, but just watching how they interacted made me feel like an alien. It's because I honestly didn't know how to respond to pleasantries and having conversations that didn't include pointing out what someone was doing wrong or talking about them behind their back in a negative way. In addition to that, I had nothing positive [from my life] to contribute to conversations. So - much as I did throughout my younger years - I remained that quiet person at the table that looked and felt completely anxious. I dealt with it by ever so slowly pushing myself out of my comfort zone and sharing the few things I had to share, but it all amounted to awkward situations that made me believe there was something seriously wrong with me.

The sad realization began to dawn upon me a couple years later, after I left the family home to move into a small apartment with my boyfriend. It was just naturally understood that this change meant we'd start rotating days to visit for holidays, etc., and that since we were now starting our life together - both settling into our first full-time jobs - we'd have less time to hang out with the family. This was a no-brainer for his family, but my family seemed to struggle with this. There was some unwritten expectation that if I didn't call/visit every other day or include them in my weekly errands (ie. grocery shopping), then I wasn't the daughter that they wanted me to be. It was one thing when I genuinely offered a ride because we needed to go to the same place at the same time, but whenever they found out that I went somewhere without inviting them.. I was subjected to a guilt trip. Next thing I know, I'm doing a lot against my own will just because I didn't want the mental beatdown that accompanied those guilt trips.

As if that wasn't enough, my husband (who at this point in time was my fiancé) started getting picked at behind his back. He was the silent, anxious one whenever we spent time with my family... and that apparently meant there was something wrong with him and that he didn't like them. He tried to, and oh how he tried, but he finally broke down and admitted that it was because he had nothing to contribute to the conversations that took place there. It was the reverse situation of how I felt when with his bubbly, upbeat family; who I was now beginning to feel comfortable with. Anytime we had exciting news to share [with my family], it was often met with a jealous statement such as "why didn't I know sooner?" or "..must be nice". Meanwhile, sharing the same news with his family resulted in a celebration. He couldn't relate to my family and had nothing to say because a lot of conversations ended up being verbally & mentally negative. Hearing this from my fiancé, my brain about exploded.. but in a productive way. I never saw this before because I was so damn used to it!

I thought about this and realized it, but it still took me a few more years to hit a breaking point that made me begin to clearly see how unhealthy this family relationship was. We purposely moved into a new apartment in another city because I wanted to start creating some distance, but I still found myself dropping what I was doing whenever I got the call that something was needed. Anytime I tried to explain that I was honest-to-God too tired or busy, I was told that I didn't love them enough... and I ended up caving. My poor husband dealt with it.. but it finally got to a point where he seriously asked me; "When are you going to have time for you and me?". Between working full-time, commuting, and all the usual daily chores, not to mention that I often crashed in my off time because I was so depressed & tired from doing everything.. I spent the least amount of time on myself and with him. But that wasn't a good enough excuse for my family.. it didn't matter what I needed or wanted because they had to come first.

Another big indicator was actually a face-to-face conversation - that happened more than once - which stabbed me in the back while completely ignoring the fact of how wrong of an assumption it was. I thought it went without saying, but I'm going to make it clear -- the fact that I was dancing around my own needs through wearing myself thin pleasing my family meant that I spent a lot more time, energy, and money on them. That in itself isn't a problem if you are both able & willing to do it, but the fact that my parents would clearly state to me that my husband "has a good job and makes decent money" (as if $17/hour makes one rich..) and that that's why I shouldn't hold back on providing for them became a guilt trip of it's own. At the point where that entered conversations, I was already so physically ill from my mental illness that I couldn't keep a job.. and we inevitably started racking up debt trying to cover our basic living expenses. But that didn't matter AT ALL to them.. in fact, it wasn't long after that they started talking about how I'm going to buy my first house all to move them into my basement. Not once did I ever offer that up as an idea, yet it became a tall order that started to haunt me...

And all of this ended up contributing to awkward, and frankly unpleasant, holiday gatherings... only because the day-long visit opened the door to having the time to mix in all the emotions. It wasn't long before Christmas felt like not only a chore, but a day where my every gift, thought, word, and action was scrutinized. It's hard to enjoy a holiday when you have that much emotional pressure on you.. and all you're doing is trying to make the time pass so you can leave and breathe. Because of the state of my mentality, it was both sad and angry to think about. The part of me that was connected to them through guilt trips was the front grinning and bearing it all, all while forcing myself to "do better" in the ways where I wasn't measuring up... but the part of me that was the scared, neglected little girl was screaming, telling me that she was suffering even being in their vicinity and wanted it all to end. Queue my thoughts of feeling hopelessly stuck, which led to suicidal thoughts.. and it was a vicious mental cycle that ran rampant. It's a whole other story to tell you how this led to me rewriting my family (by cutting my birth family out), but I eventually realized that I was much, MUCH happier removing that mountain of stress from my life.