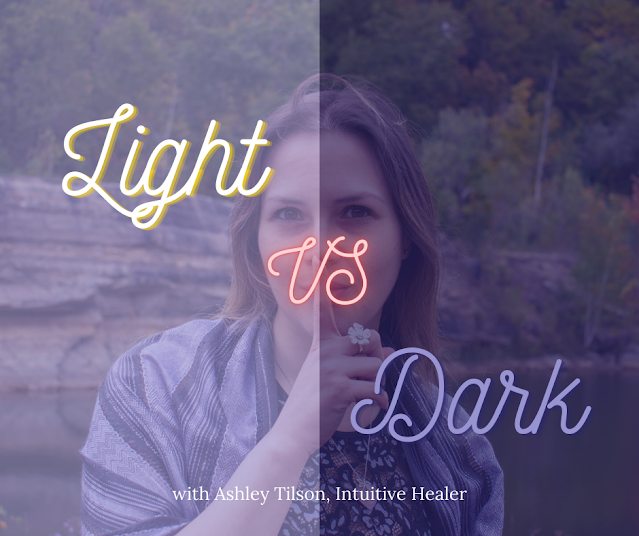 Lately I've been finding myself in conversations with others where we're discussing what's LIGHT and what's DARK. I want to take a moment to state that everything I share in this blog comes from a place of love and education, and much like this content - it's a mixture of conclusions that come from my work and discussions with both clients & fellow healers. I would be lying if I said that there aren't healers that deal with psychic attacks after posting some spiritual truth online... In fact, every once in a while, we have to refrain from certain practices because such people try to invade our space and negatively influence us.
The deeper you go down this "rabbit hole", the more shocking some things become. When I talk to my students about how there's as many people out there - practicing dark arts with the intention of watching the world implode on itself - I'm both humbled and at-home noticing how not a single person even hesitates to agree with that. But here I want to take a step back to some "beginners" information on how to determine what's coming from a place of love & light, and what's completely negative.
In all honesty, I like to begin by referring to psychic messages through comparing them as if they were mental illnesses. I've found this to be a relatable theory because (due to my life's experiences) I used to believe they were part of my mental illnesses until I recovered and discovered otherwise. Since we know that it's entirely possible for a spirit to act like it's helpful when it is in-fact the exact opposite, there are people out there suffering and have no idea about the actual cause. Light spirits will make you feel powerful and enlightened whereas Dark spirits will make you feel stuck in a cycle of negativity, accompanied by feeling physically & mentally ill.
It's hard to blame someone for leaning into the spirit guide they're working with because in some cases, this is the only validation they have... but at the end of the day, these dark spirits are just playing a game. The most malevolent will only come around to watch and deliver cryptic messages; like in the case of one of my clients, where a spirit has told her daughter she'll "take her eyes" and that "everything will be over soon". And some, like Shadow Men, can be hard to identify because they're silent leechers that manipulate the mind over time.

In order to determine if you have the "right" spirit at your side, you need to take some time to (1) pay attention to the messages/influences, and (2) use the following guideline to figure out if it's serving you or hindering you. 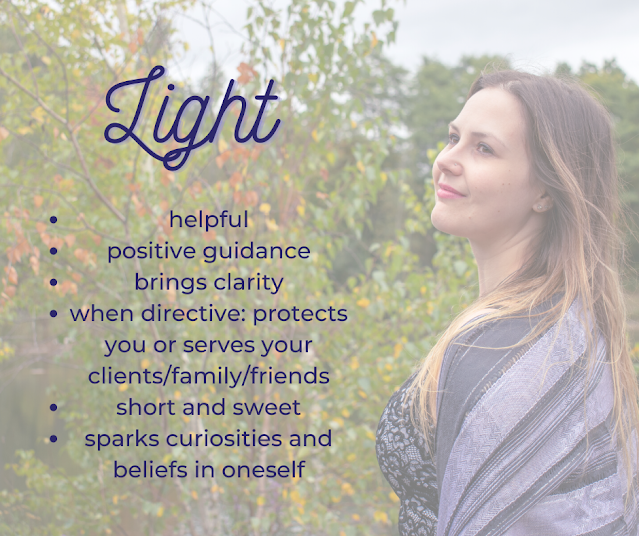 In a nutshell: Helpful spirits will only pass along straight-to-the-point messages and directives that either protect you (from something unsavoury that's about to happen) or guide you. A lot of the time, they only facilitate these messages through you as gut feelings or physical sensations that give you pause to stop and ask what's happening. Once you build up that bond, messages come through more clearly and frequently - but - are something that you're able to receive anytime you ask for it, regardless. People that ignore messages or "tell off" their light spirit guides can inadvertently send them away and it does take more practice to bring trust back to the relationships and therefore, allow more messages to come.
An example I share with my students was something that happened to me early on in my journey and turned into one of my biggest lessons in trust; I was driving to a shopping plaza to pick up food one day when, as I was at the stop light waiting to turn in, I was suddenly hit with a gut-twisting pain that made me feel like I was doing something wrong. I tried to breathe through it and shrug it off, but when that didn't help, I asked what was going on. That's when I heard "you don't want to be here right now, just keep driving". Logical me decided to ignore that and drove in anyway... only to drive right past someone I knew that triggered my past trauma (because they caused a lot of it). From that day forward, I learned to LISTEN and never second guess.
Another example that I teach about has everything to do with how we read people. I (like many others) am able to easily receive and tap into visual messages, but a lot of times, the messages are delivered as single words. I find that light spirit guides will intentionally do this to test us and make us rely on our own intuition to connect the dots and deliver the meaning behind it. If we miss the point, they'll continue to feed us "hints" until we finally come into that "ah ha!"- or, if needed (such as when we're receiving for ourselves), they'll just reveal all that we need them to. Everything is clear, revelatory, and to the point even if it's not direct or obvious at first. Their messages only SERVE us, which is how we know we're not dealing with a dark entity. 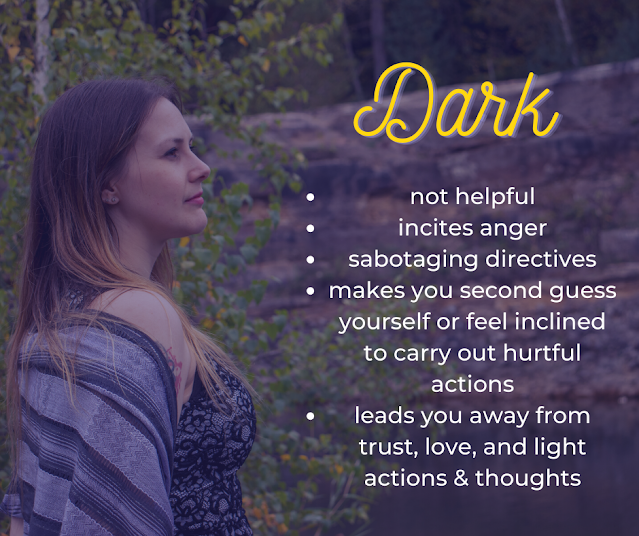 Whether it's obvious or not, dark spirits only see us as a toy and/or energy source for them... and that means they'll do what they see is necessary to keep us around. Where they come from depends on whether they're a lost soul roaming the physical realm (ghost) looking to cause trouble, or if they're from higher dimensions and attached to us for a variety of reasons. Sometimes, dark rituals will send these entities to us, and anyone that's been cursed is walking around with a target on their back that makes them easier to find. Having dealt with a Shadow Man as a child, I can tell you that you don't even need to welcome them in order to have an attachment - it can sometimes be from being in the wrong place at the wrong time.
One of the easiest ways to determine if it's a darker energy surrounding you is through asking simple questions and seeing what's delivered in response. As you probably already expect; dark messages are the complete opposite of light. They will tell you exactly what to do and in a self-sabotaging way. THEY ARE NOT HELPFUL! Some even get so angry that if you don't listen or go against their directives, they'll make you feel it and experience negative energetic effects... which is how they'll get you to listen. No well-intended spirit makes you feel like they have control over your life, but these ill-intended spirits do. In fact, I found that an invisible weight that made me feel stuck - along with lot of my negative self-talk - went away once I released my attachment to my Shadow Man; because I was always fearful & ignoring him, I was always angering him into feeding off my energy which made me feel even more miserable about myself.
Where this is in harmony is when someone practices any dark magic, and/or feels justified in listening to and abiding by this spirit. This gives them more power and enforces the attachment. The truth bomb that's revealed here though is that light spirit guides will avoid people that lean into these dark connections. If you're aware that it's not right and you're not feeding it back, then you'll be able to - at times - speak to lighter spirits that see you can find your way out of it... but otherwise, they'll recognize what side of the light vs dark battle you're on and stay away. This is the situation in which we find people experiencing mental distortion over their capabilities, self-awareness, and much more. The good news is that this is alleviated once you avoid the messages, cut the cord, and start doing lightwork!